R Millican Opticians are an independent group based in Merseyside, owned and run by Rob & Ruth Millican.

We enable customers to choose from a range of modern eyewear products designed with the fashion conscious customer in mind. All of this, coupled with a truly unique selection of international brands from around the world justifies the popularity of R Millican Opticians as a leader in eyewear products and services on Merseyside.

With styles ranging from avant-guard to simple and elegant, customers are presented with a wide spectrum of choices to suit all their needs, tastes and budgets.

At R Millican Opticians we believe in doing things better.

Established for many years providing Merseyside with top quality eyecare and eyewear.

As well as our sophisticated screening techniques, our experienced optometrists will provide you with a thorough, professional eye examination, ensuring that your eyes and your vision are maintained in their optimum condition.

There is no “hard sell” – if you do not need any optical correction or if your present prescription is stable we will tell you.

Our highly trained staff are dedicated to ensuring our patients and customers get the best care and attention.

R Millican Opticians – an independent family opticians serving the people of Merseyside for over 60 years.

The very first Millican family opticians was started over 60 years ago in 1949 by Harry Millican, this was quickly followed by a similar venture in Everton Rd in 1951 opened by his brother John Millican. A third brother, Geoffrey, opened a practice in Moreton on the Wirral in 1970.

John Millican had four sons who all qualified as optometrists!

The business is now managed by Rob and Ruth Millican.

It truly is a family affair! 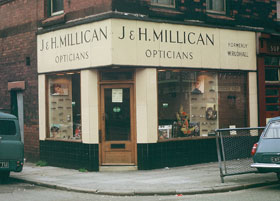 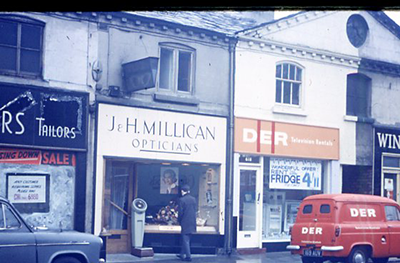